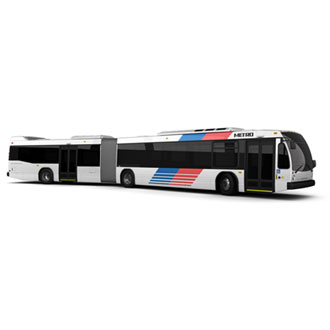 Nova Bus will deliver 70 articulated buses to the Metropolitan Transit Authority of Harris County, in Houston, TX, over the next year. The order is valued at approximately $48 million.

Gilles Dion, President and CEO of Nova Bus, says this is “a tremendous opportunity to expand Nova Bus’ presence in the Southwest”.

METRO is the region’s largest public transit system. It operates more than 1,200 buses and 370,000 times a day people use a METRO service.

“We’ve been privileged to be able to demonstrate our product quality and customer support during the 6-month trial period, and we look forward to making this partnership a mutual success,” he added.

METRO’s new high capacity buses will be used to renew Harris County’s bus fleet and will be put into regular service. The articulated vehicles will be able to carry up to 112 passengers along any city streets, thanks to their similar maneuverability to 40-foot buses. Nova Bus’ LFS Artic buses are currently in operation in large urban centers including New York City and Montreal.

The vehicles will come equipped with Nova Bus’ proprietary electric engine cooling system, resulting in significant fuel savings, reduced greenhouse gas emissions and competitive life cycle costs. The vehicles will also feature Nova Bus’ latest transit bus interior, a design based on client and focus group feedback as well as inspired by other industries such as aerospace and rail transportation.

The order will be assembled at Nova Bus’ plant in Plattsburgh, NY. Nova Bus is part of the Volvo Group, which employs approximately 12,000 workers in the United States in seven production facilities.