New generation of Nova LFS to hit the streets of Chicago 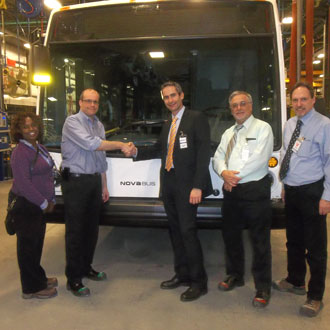 Nova Bus has secured a $148 million order for 300 Nova LFS Smart BusTM for Chicago Transit Authority. Contract options could bring the total up to 450 vehicles.

Delivery of the 40-foot vehicles is expected to begin in early 2014. As part of CTA’s bus modernization plan, the new LFS Smart Bus will replace older models of Nova LFS that CTA has had in service for 14 years.

“We look forward to helping CTA modernize their fleet to provide a reliable and world-class service,” said Jean-Pierre Baracat, President of Nova Bus. “We thank them for their renewed trust in our company and vehicles.”

“Continued investment and upkeep of our bus fleet is critical in keeping the city of Chicago moving,” said CTA President Forrest Claypool. “These new buses will replace existing buses nearing the end of their useful life and will ensure the CTA continues to provide safe and reliable service through a modernized fleet.”

CTA operates one of the nation’s largest public transportation systems, with a fleet of 1,781 buses serving all of Chicago and 35 surrounding suburbs. Buses provide 58% of all rides taken on CTA each year: in 2012, bus ridership reached 314 million recorded trips.

CTA’s new Nova LFS buses include many improvements compared to models delivered 14 years ago. Their passenger environment was optimized based on client and focus group feedback. The design, inspired by aerospace and rail transportation, offers a comfortable ride and easy maintenance for operators.

“Our goal is to combine the best of manufacturer and operator field expertise,” added Mr. Baracat. “Each city has its own reality. Buses operate 24/7 in highly variable conditions. Consequently, we continuously work in partnership with our customers to provide proven and tailored buses that are built to last.”

CTA’s Nova LFS buses are fully accessible. Their front entrance and aisle, combined to a gradual boarding ramp, make it convenient for wheelchair and mobility devices users to get on and off the bus.

Nova LFS buses are currently in service all across the nation, from New York City to Honolulu.

While meeting transit needs, CTA’s new vehicles will also boost Chicago’s local economy and create jobs. Seats for the 300 buses will be manufactured in Chicago by Freedman Seating Company, a 120-year-old company based in Humboldt Park.

“Everyone at Freedman Seating is proud and excited to have earned a place in this important program,” said Craig Freedman, President of Freedman Seating. “Our selection to provide seats is a win not only for the City but a win for FSC’s 550 dedicated associates. The City will be getting the latest in transit seat design and innovation, built right here in Chicago. For over 100 years Freedman Seating has created jobs for the community but these jobs have a special place in our history. We are all looking forward to riding CTA buses and sitting on seats designed, tested and built locally”.

Additional bus components will also be supplied by Illinois-based businesses, such as door systems by Vapor Bus International from Buffalo Grove.

The buses will be assembled in Nova Bus’ Upstate New York plant. Each Nova LFS will contribute to the creation or retention of a total of 1.1 quality manufacturing jobs and 5 indirect jobs.

North Country Chamber of Commerce President Garry Douglas welcomed the announcement: “This order is great news not only for Nova Bus but for the many suppliers in the region who will take part in delivering this contract. We now look forward to continuing to work with Nova as a central player in Plattsburgh’s emergence as North America’s premier center for the production of 21st century transportation equipment. Onward and upward for Nova and our transit cluster! ”

Nova Bus is also part of the Volvo Group, which employs about 12,000 workers in the United States in six production facilities.